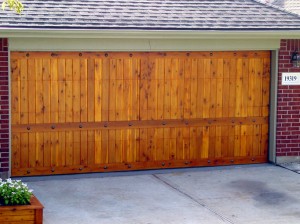 Now everyone knows that when you accessorize with jewelry, you need a matching set to create the “wow” look. The same principle applies to the exterior of a house. When I built my cedar shutters, I knew that something was missing. Doug recommended a matching garage door to compliment the shutters I built. I was a bit hesitant at first, because I never put a lot of thought into a garage door, but then I researched the facts and realized how important a garage door is to the look of a house.

The garage door I built is an overlay of real knotty cedar wood – tongue and grove panels. The task to build the garage door was a bit daunting because of the huge amount of wood and skilled cutting involved. Every panel had to be precisely cut or the fit of the panels would not be matching. Careful thought had to go into the position of the wood and how the wood would be attached to the metal garage door panel. In addition to that, adding all this wood would change the weight of the door thus forcing more pressure on the garage door springs. I had to calculate the new garage door weight, and order springs to compensate for the poundage.

Now while I changed the springs, I added an extra “bling” to the door façade by installing clavos heads. The round metal “button” look represents a clavos. A clavos is a word in Spanish for nail head. In some culture like the Spanish, if the nail heads are large and exposing, it represents strength and over time, has become a symbol for wealth. As my friend in construction would say, “they look like money!” 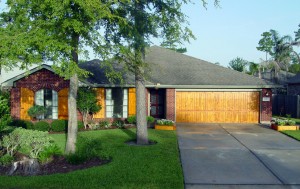 To me though, it was more about the cohesiveness of the front façade. The house actually was half windows and half garage. I never realized that a garage door could consume so much of the house look in the front – especially where mine was about half the house. Oddly though, what was originally considered ugly and standard, gave me the desire and chance to change that perception into a wonderful look that had complimentary matching cedar wood features. This is one thing about mother-nature you cannot beat, the beauty of her warm natural look.